TOP > Category > Field > Things to Do > Visit the Nagawa

Legend of the Iwa Komagata

Iwa Komagata that is the origin of the name of Tateiwa stands on the shore of Yodakawa, and with the figure of crisp and horse as engraved. This rock There are several legends. 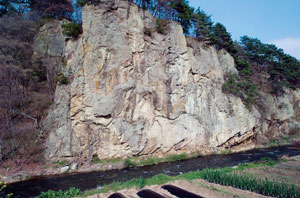 To visit his father was called to Sakimori, young but brother and sister came to Tateiwa riding a horse, accidentally fell into the horse Morotomo Yodakawa from the top of the rock, which is also height several tens of meters lose sight of the front in the fog It was.
And their horses brother died, but, oddly enough, sister that was nestled in the wounded white horse had fallen to the dry river bed without a single injury. Rock stand From this time on the shore of Yodakawa the moon is Komagata OJ it was not until now, sister play a reunion at this place with my father to hurry the journey of homecoming from Sakimori ...