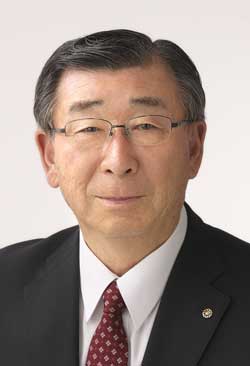 Happy New Year to you all.

We would like to congratulate you on the fresh welcome of the new year of 31.We would like to express our sincere gratitude for your understanding, cooperation, and support for the promotion of town administration.

Looking back on last year, it was a year of great disasters all over the country.The weather was unstable throughout the year, and even in Nagawa, cherry blossoms bloomed in March, and while I was surprised at the arrival of early spring,To sayIn addition to the arrival of "the summer of the heat with danger of life" recognized as one disaster, a typhoon reversely appeared, and the local heavy rain guerilla heavy rain frequently hit our city It was. Rainy season continues in the fall of fruit, harvesting, harvesting, yearly 11It was the 1 year that was touched by unpredictable natural phenomena such as no snowing falling in the moon, not easy progress of the seasons even if it became a teacher training.

For this reason, the volunteer road cleaning in the Nagato area in the spring and the townspeople's athletic meet in the fall, which were planned in the town, were canceled in the year, but it was good that there were no major disasters or man-made disasters. Since the risk of natural disasters is extremely high, in November we signed a disaster agreement with the Ueda Sales Office of the Electric Power Network Company of Chubu Electric Power Co., Ltd. and the social welfare corporation Yodakubo Welfare Association, and worked closely together.Preparing for a disaster with the townspeopleI would like to lose it. 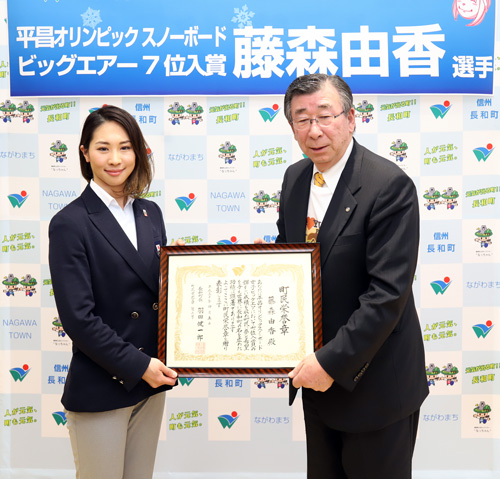 It was held in Korea in FebruaryIn the Olympic Games, Yuka Fujimori from our town has played 4 consecutive tournaments and has won the 7th place in the event of big event a big event. Every time Yuka Fujimori participates in the Olympic Games in the town, he was introduced as "from Changwa-machi", praised the achievement for notifying the name of "Chowwa-cho" throughout the world in the world, and the second townspeople I gave an honorary chapter.

Residents are aware that in May, a total of 14 municipalities, including XNUMX municipalities in Nagano prefecture and XNUMX cities in Yamanashi prefecture, were designated as Japan Heritage as "the Jomon world in the central highlands where the stars fall". I know that.It can be said that Japan's oldest brand "Obsidian", which is XNUMX years old in Nagawa Town, was highly evaluated and attracted attention.The "Koshin Jomon Culture Dissemination and Revitalization Council", which is the center of the Japan Heritage-related business, has also been established, and the business will be carried out in earnest in the future.The town will also promote its own publicity activities with the support of the prefecture.We will work on town development that makes use of the historical heritage that the town has been working on for many years as a great opportunity to connect to regional development.

From July to August, the "Youth Overseas Dispatch Exchange Program" was held, and eight high school students from Nagawa Town Youth Obsidian Ambassador visited Thetford, England, and in addition to a stone tool making workshop, it was the first homestay in the town. I have experienced.

10In the month the UK Teenage History Club visited Changwa Town and participated in the events "Stone Making Workshop" and "International Exchange Children's Summit" held as part of the autumn exhibition at the Nagano Prefectural Historical Museum Ambassador Youth Kaohsiung cooperated and instructed the making of stoneware. Each tie is further deepened, and in communicating the historic heritage to the future, by having meaning of cooperating across regions and countries and by working togetherI wonder if I learned the importance of rare relationships of trust.

It is the 14th year since Nagawa Town was born.

The trend of population decline in the town is accelerating more than expected, with natural and social declines continuing.Deterring the population decline cannot be achieved by just one municipality, but Nagawa Town must take all possible measures to mitigate the trend.Focusing on the eight promises promised to the townspeople, we will determine the direction the town should take while looking to the future of Nagawa Town.

Nagawa Town will continue to shine as Nagawa Town, pass on the smiles of the townspeople to the future, and further promote the creation of a living area where you can feel "I'm glad you lived!" By collaborating with the townspeople. We appreciate your support and cooperation.

This year marks a major milestone in the new era, and it feels like a solemn and historically significant year.

We pray that this year will be a wonderful year for all of you, and we would like to extend our greetings at the beginning of the year.