Heisei We would like to thank you and congratulations of 29 year refreshing welcome the New Year in.

Understanding from peacetime to the promotion of the town administration, cooperation, I would like to thank look forward to your support. 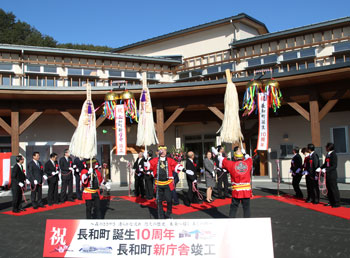 Shinsei "NAGAWA" was passed 11 year from raising the first cry. If you look back at the last year, new building, which also said that the symbol of the merger was completed, it will be held "NAGAWA birth 10 anniversary ceremony" as well as "new building completion ceremony" on February 5, February we started the office business from 15 date. The completion of the new building will be a place that was a renewed determination to continue to push forward to the staff work together to opportunity "uplifting urban development". 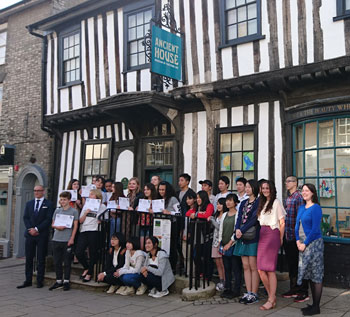 The town is promoting the exchange with Setford town of England in mind of the signing of an international sister city, but last year from 9th July to 18 day Chunichi High High School Ambassador Ambassador 14 people in Changwa Town As ambassador for Youth Black Yao stone, I dispatched to the UK. In addition to presenting the Kuroya stone culture at the World Archaeological Society held in the UK, he has also provided practical skills instruction on the Black Yellow Stone Pendant and Yagiri etc. Ambassadors' valuable experiences over the 10 days can not be replaced by anything, and experiential realization of heterogeneous culture, customs, language, life, and value is a similar daily life in Japan By comparing it with the experience, you can recognize with relativeity and you will be able to cultivate an international sense that Japan can see Nagatomachi from "inside" and "outside" I hope that it will become the foundation that grows as a large.

NAGAWA was has been said that the relatively small town of disaster, but the guerrilla heavy rain of August 18 date was intended to overturn it. Yoda Kubo is a rain gauge that is installed in the southern part of the fire department keeps track of the rainfall that 47.5 mm per hour, but that has not been experienced once how to get off of the rain, was it also the local ones . There was no Fortunately, human suffering, but some other there was a victim of the floor flooded house, earth and sand collapse, etc. There has been at 130 locations.

Concord NAGAWA, Ueda, Komoro, Chikuma, Tomi City, Tateshina-machi, Aoki village, 8 municipalities of Sakaki town, has been certified in fiscal 27 years 6 month, the Chikuma River Wine Valley Zone as Special Zones for Structural Reform in response to the established "Chikuma River wine Valley zone Council", to build a cooperation in the area now that they would further promote the wine industry of the region. In the town launched the "black 耀 wine grapes Project", we have decided to promote the cultivation of wine grapes with the aim of ensuring the idle degraded lands of the Resolution and new farmers. Currently, in addition to receiving a public offering to training towards the two to learn the cultivation techniques, it is where you have the selection to the location of the test field, we aim to new industries as a producer of wine grapes.

Other initiatives new business due to economic development projects in the area Cooperation Volunteers, use such issues after the public facilities, but we abound, as NAGAWA is NAGAWA, firmly independent shining five years 10 year also to go and forward-looking, overlay the new initiatives, "people are healthy, the town is also healthy, town NAGAWA the uplifting" toward the future is to continue to build, is the most important issue of the town falling birthrate we believe that lead to countermeasures.

Nitorimashite also townspeople of everyone and NAGAWA, this year is as I would like your prayer becomes a great year, we will consider it as the greeting of the New Year.