○ Emergency broadcast [disaster prevention administrative radio and wired announcement terminal]   Is it a disaster prevention wireless outdoor speaker and a wired notification terminal in the event of a disaster?  Et al., The emergency broadcast by J-Alert (J-ALERT)  It has become to flow.   As a standard, the predicted seismic intensity in central Nagano announced by the Japan Meteorological Agency  It has become to be more broadcast.

○ What is the national instantaneous warning system (Junko Shunji Keiji system, common name: J - ALERT (J alert, Jay alert))?   Dealing with it by using communication satellites and the town's broadcast disaster prevention administrative radio  There is not enough time to large-scale natural disasters and ballistic missile attack  The emergency information about the 撃等, directly from the "country to residents instantly  This is a system that can be "transmitted to. 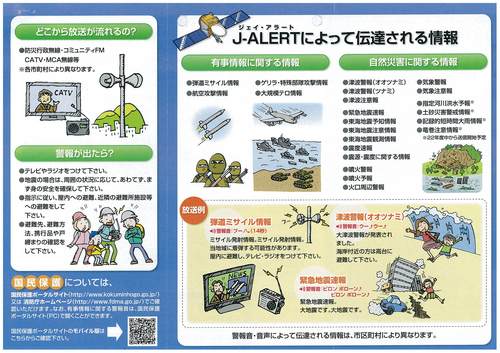