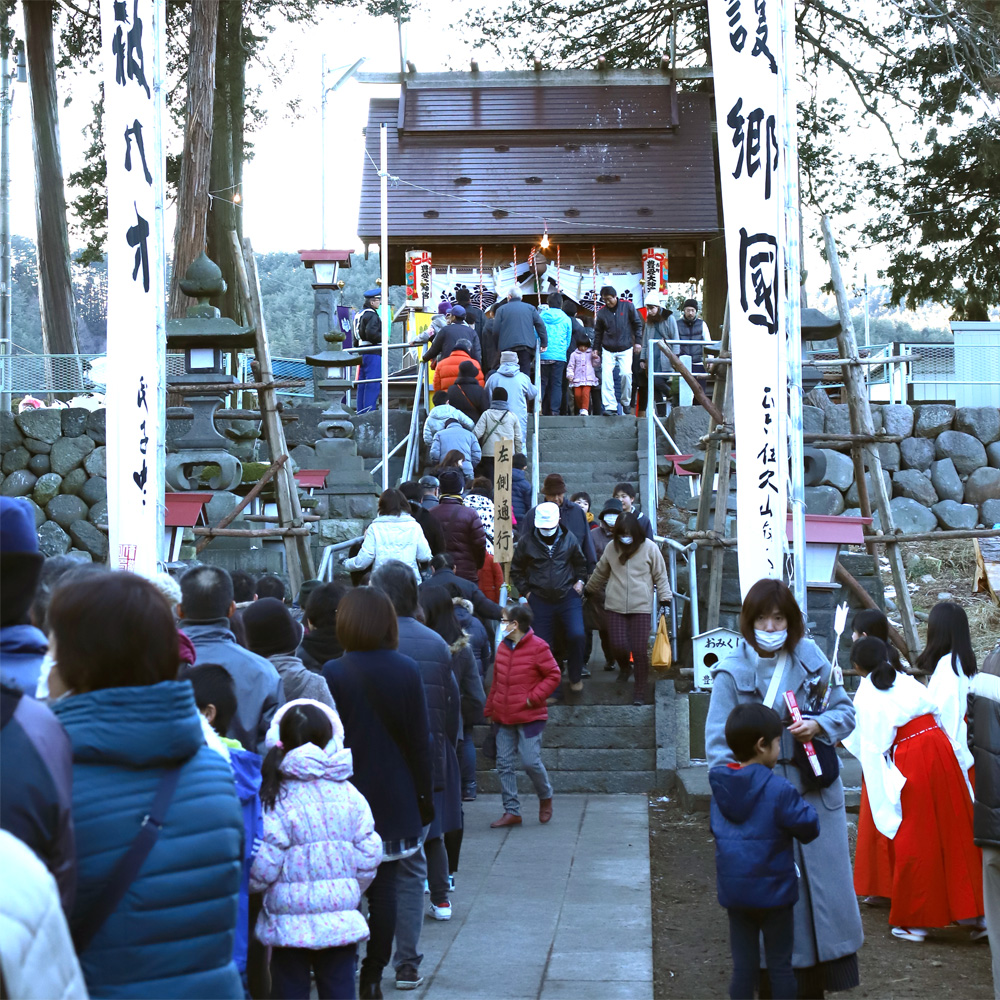 Furumachi of NAGAWA (formerly Nagakubo Furumachi) located in Yutaka Furumachi 受大 of Shrine annual festival is known as commonly known Otaya Festival.
Its origin is the document of the 1828th year of Bunsei (XNUMX) at the end of the Edo period, which is the oldest record at present, but it is thought that the festival has been held for a long time.
At Furumachi Toyokei Ojingu, a relocation festival is held every 20 years, following Ise Jingu, and the annual festival is held from the evening of January 14th to around noon on the 15th.It is customary for families with customers to start this day at the beginning of the year and start at that age.
People of pilgrimage Ueda, also visited from Saku district, turnout of about 4 to 50,000 people in these two days is expected.
At the Otaya Festival, when the lives of the common people became stable and there was room to spare, floats began to be dedicated to make the festival prosperous, and it was recorded in the diary of the 1835th year of Tenpo (XNUMX) in the old family's collection. The sentence, "Mita (Travel) shop is crowded, and there are several places to wear," is the record of the oldest floats currently known.
The floats were designated as an intangible folk cultural property selection in Nagano Prefecture in 38 as a valuable traditional culture that inherits simple peasant art, and are currently dedicated by five preservation groups in each ward.

In the early Edo period, in the Amakusa and Shimabara regions of Kyushu, lords were harshAnd severe Christian suppression. In October 1637, Christian farmers who could not stand this stood up,Awakened. This is Shimabara's rebellion. There were XNUMX rebels. He was said to be the son of God who saved ChristiansIs a boy. Although still in his mid-teens, he encouraged the peasants and inspired their religion. Eventually, the rebels gathered at Hara Castle on the Shimabara Peninsula and fought fiercely with the Shogunate forces.

On the other hand, the Shogunate sent a large army of 1638 in 12 and made a total attack in February of the same year.Shiro was defeated by this attack, and Harajo was also attacked.In the wake of this turmoil, the Shogunate tightened the control of Christianity and trade and completed the so-called seclusion.

Time has passed, July 2018, Harajo"The Nagasaki and Amakusa regionsKirishitan-related"Has been registered as a World Cultural Heritage. The history of Hidden Christians will begin after this Shimabara rebellion. 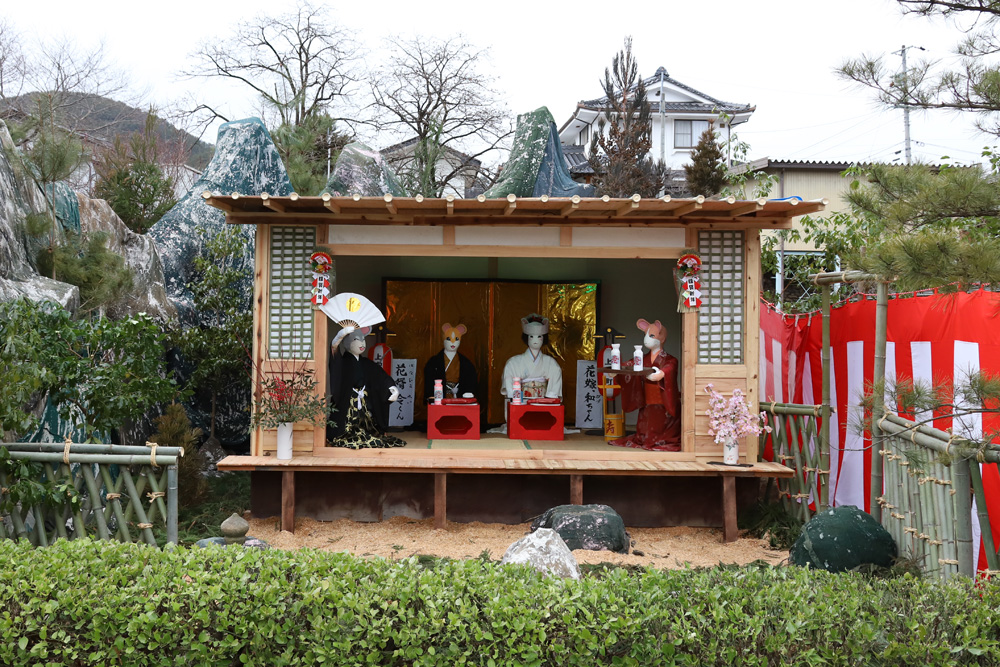 Once upon a time, a cute daughter was born to a mouse couple.The two loved their daughter and took good care of them.

My daughter will soon grow up and be married, and the mouse couple is the best in the world.The mother rat thought, "I'm going to be the sun. It's warmly shining us every day." So they went on a request and said, "Sun, sun." And he said, "Who are you calling me?"The daughter ofI want you to. When I asked, the sun said, "The person who is bigger than me is Mr. Cloud, and no matter how much I illuminate, the cloud hides me." The mouse couple was surprised.

Climb the mountain to Mr. Kumo, go to the top, and ask Mr. Kumo, "Hey, Mr. Kumo. I want you to have a daughter at home.Was there. "Said Mr. Wind, who is even more powerful than me. He is blown away by the wind." Then the wind said,No matter how much I blowThe one who is greater than me is Mr. Wall. The mouse couple was surprised.

Dad and mother mice have come to town.There are many houses and the walls are lined up. "Hey wall," they called in unison. "I have a request for the greatest wall in the world. Please have our daughter married." Then Mr. Wall laughed in a loud voice, "Wahha, wahha." "The greatest in the world. It's not me, but the one who is greater than me is the mouse. "The mouse couple was surprised. "No matter how strong I am, if I'm bitten by a mouse, a hole will open immediately.", "I see, that's right.", The mouse couple nodded and went home.

【Nakamachi XNUMXrd floorThe place of the beginning of the zodiac 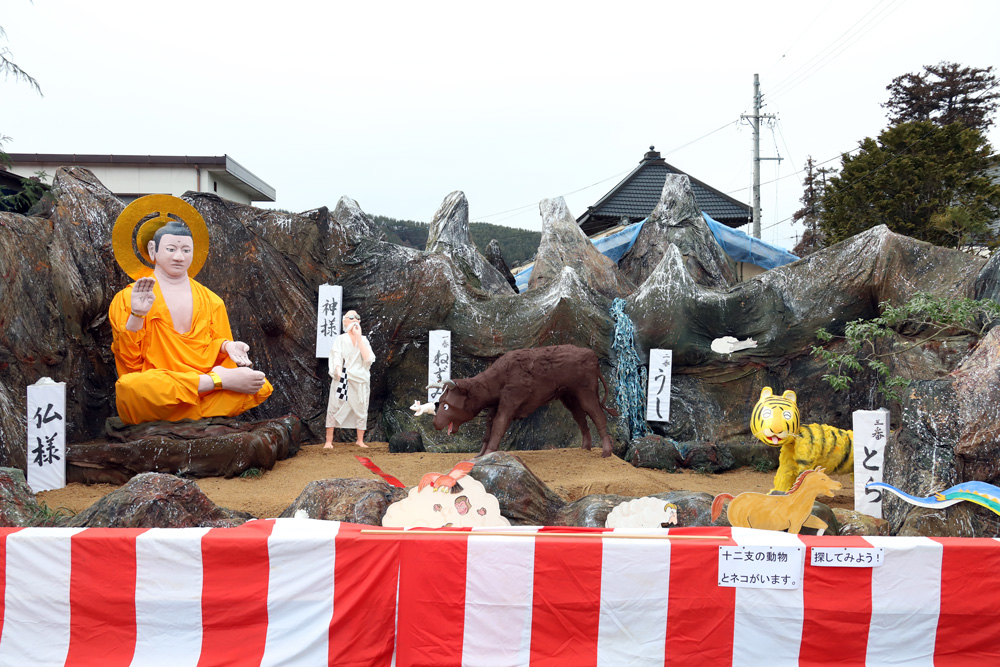 It's a story of old China.God tells the animals, "On New Year's morning, the ones that came from the first to the twelfth will take turns for one year to become animal generals."Was issued.

The cow said, "I'm slow."Departs in the evening. When I came to God early on the morning of New Year's Day, a mouse secretly riding on the back of a cow jumped and jumped to GodAs a result, rats came first and cows came second. The tiger and the rabbit ran out at sunrise, the tiger was the third, the rabbit was the fourth, but the tiger lost to the cowTo cows since thenI started to get stuck.And the snake arrived at the same time, but the snake is ahead of the respected dragonThe dragon is the fifth and the snake is the sixth. The horse departed late but was fast because it was fast. Sheep departed in the dark but his feet were slow, so it was number eight. The monkey and the dog left with them, but they fought too far on the way and were so terrible.We finally arrived inside, so the monkey was the ninth, the chicken was the tenth, and the dog was the tenth. The boar actually arrived first,, I was running around and was shaking. Now, the cats have startedI slept in the back. The cat was told by the mouse that the competition was two days and lies. The cat who knew it later was Kankan. Since then, they have been chasing rats.

ContactEverything, whether a rat cheated or a monkey and a dogIt was supposed to be goodI was smiling quietly.

A long time ago, to KyushuFather who went toMy younger brother and sister came here on a horse, but lost track and fell on this rock with the horse.

My brother died, but my sister was protected by the horse I was riding.There was no one. From that time on, the rock walls had traces of a horse shape and came to be called "Komagataiwa".

After that, the father who came back from the guard with his servant reunited with his daughter here and had a son.In cooperation with the villagers, he increased the fields and built a ranch, raised horses, and developed a rich village.

And the Komagata Shrine is on the rock with a mysterious Komagata.It was ... There is a tradition that remains. 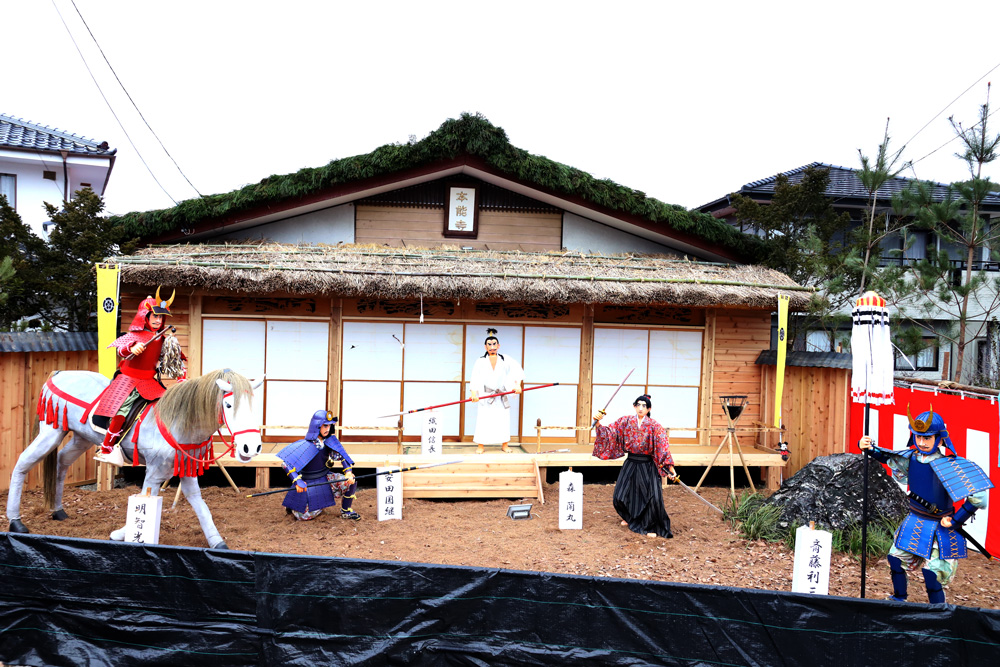 In the early morning of June 10, 1582, Akechi Mitsuhide defeated Nobunaga Oda, the lord of the world, at Honnoji Temple in Kyoto.Why MitsuhideThat's why "Honno-ji no Hen" has become the greatest mystery in the Warring States period.

In May 10th Tensho, Mitsuhide, who was entertaining Ieyasu Tokugawa at Azuchi Castle, was ordered to go to China to reinforce Hideyoshi Hashiba.When Mitsuhide is ready to go outIn the prayer for victoryWas done. "Time is now Sign Of Mitsuhide is the source of Mr. AkechiIt is alleged that he had ruled over the world.

June XNUMXst, midnight,XNUMX Akechi's great army from Kameyama CastleAnd aimed at Kyoto. Mitsuhide said, "Upper is my army.First, head to Kyoto. "And the military was leaving. At around XNUMX:XNUMX am on the XNUMXnd, it was reported that the arriving at Katsuragawa in Kyoto fired a rope with a gun and prepared to start fighting at any time, telling the entire army that "the enemy is in Honnoji Temple."

After XNUMX amTheMitsuhide Army goes to Honnoji TempleStart an attack. Nobunaga is a surname and a forestYasuda fights with his bow with a spear.He was hurt by his spear, and finally set himself on fire and cut his belly.

Akechi Mitsuhide sought the light of hope in the world of the Warring States, where new values ​​began to sprout. Isn't it possible to think that he was a wisdom general who aspired to the Japanese outlook on life, saying, "If you don't protect the old things, the beauty of the human world will be destroyed."The end of Heisei and the arrival of Reiwa, a new pathDeliver courage and hope in this era.

Heisei 31 years of Oda and festivals