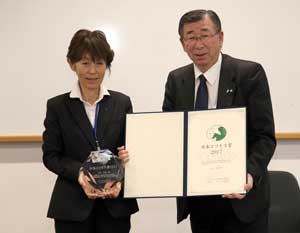 Yukie Otake has been conducting research on obsidian mining and distribution for a quarter of a century, centering on the Takayama Sites, which is one of the obsidian origins concentrated in the central highlands of Nagano Prefecture.In particular, the concrete method of mining and the actual condition of continuation and interruption of mining were clarified by investigating the obsidian mining traces of the Jomon period, which were found at about 200 places at Hoshikusotoge.
In January 2001, the mining traces were designated as a national historic site as the "Hoshikuzunosato Obsidian Origin Site", and the Nagawa Town "Hoshikuzu no Sato Takayama Obsidian Experience Museum" was established at the foot of the pass. Based there, we are focusing on exhibition activities that convey research in an easy-to-understand manner, and are promoting a wide variety of experiential learning, original events, and the "Obsidian Hometown Festival."
Mr. Otake is known all over the country for his explanations of exhibits and hands-on learning at the Kuroyoseki Experience Museum, and is also attracting attention from abroad. Introduced by.There are many repeaters in the various efforts at the experience museum, and it boasts an exceptional ability to attract customers as a museum in the mountains.
In addition, Nagawa Town signed the world's first sister archaeological agreement with the famous Neolithic flint archaeological site, Grimes Graves, in 2016 in Thetford, England, due to the commonality of "mining site". Although it was signed, Mr. Otake also played a central role here, leading the "Nagawa Youth Obsidian Ambassador" consisting of 14 junior high and high school students.
In this way, based on the experience museum located in the mountainous area of ​​Obsidian in Nagano Prefecture, the systematic development activities related to research, preservation and dissemination, and experiential learning of the obsidian mine during the Shinshu Jomon period are the preservation of grassroots ruins. It is also noteworthy as a form of dissemination and utilization.The practice of Mr. Otake, who has taken the lead in promoting activities, is highly evaluated.
For the above achievements, the Japan Icomos National Committee will award Mr. Yukie Otake the "Japan Icomos Award 2017".

We'd love to hear from you!